Why is Only One Group of Supremacists Being Given Attention?

As an Israeli Jew and the grand-daughter of Auschwitz survivors I can tell you I am not afraid of the Neo-Nazis, nor the KKK, nor any one of the similar, right-wing, extremist groups associated. Disgusted? Yes. Appalled and in pain for all of us who have been affected, especially for those Holocaust survivors who have just watched this Charlottesville march unfold? Yes and yes. But afraid? No.

Why am I not afraid, you wonder? Because their time is over. Because they are weak and we can, and do, squash them with ease. We will put them in jail if they try anything with us. They are dying out and their numbers generally drop. To give a little perspective: there are approximately 6,000 of these people throughout the entire USA. I find it somewhat insulting to be told “Be afraid! Neo-Nazis are back and will kill you!” when they were never gone and I know very well where I am truly in danger. I am in danger not from the dead ‘white supremacy’ or Aryan ideology, but from Islamism and its new partner in crime: the fascist anti-fascist movement to which I refer as Leftism.

It is not to say that we should not give attention to the crazy white supremacists who marched in Charlottesville, of course we must. We must denounce it and make it clear it has no place in this world, and we do and we did. But one has to wonder: why the silence over all other, and today far more dangerous, supremacists? And why does this attention on them come at us (and I mean AT US) with the false messages that we are all suddenly in a new and grave danger? Let us explore this question.

Why the silence over all other supremacists?

This ‘Unite the Right’ group marched citing such gems as ‘protecting their people’ from the ‘danger’ inherent in ‘mixing different cultures’ while carrying signs like: ‘End Jewish control over America’, sounding exactly like mid 1930’s Nazi Germany. They Heiled and some wore t-shirts and flew flags sporting pictures of Adolf Hitler and / or Swastikas and such symbolism. It is, obviously, horrendous and disgusting.

The unease I feel about the magnitude of the reactivity around this all is that a far more dangerous bunch of supremacists is running wild and free and getting barely a whimper. In fact, they are getting a lot of support. I say ‘far more dangerous’ as this bunch is far greater in number, far reaching in that it is now widespread in terms of geography and embedded within Western society, has as its bottom line a religious belief system which belongs in the dark ages rewarding destroying the Infidel and fueling suicidal acts of terror, and brings with it barbaric practices which have gone unchecked for centuries. Curiously, and ironically, it is now freely going unchecked because of the protection afforded it by Leftists, especially the ‘anti-fascist’ ANTIFA. I am, of course, talking about Islamism. No, not Islam, but Islamism.

Muslims make up 1.8 billion people, that is 24% of the world’s entire population. There are 3.35 million Muslims in the United States. Now let us say for argument’s sake that only 3% of Muslims support Sharia Law and the use of terror against civilians. (The number is higher than this, but let’s leave it as 3% for now). This would mean that in the United States the number of people supporting Sharia Law and the use of terror against civilians would be: 100,500 people. I must state here that the peaceful majority (and peaceful people are of course the majority) are irrelevant.
Now among the Islamists we have such vile rhetoric as the one spilling out of the mouth of Egyptian-American Sheikh Ammar Shahin a few weeks ago, where in his sermon at the Islamic Centre of Davis, California, he prayed for Allah to annihilate the Jews. He also spoke of the “filth of the Jews” and so on and so forth.
This is the virtual march of the Islamists. There appears to be no real response, save for some relatively benign, online news articles some of which quickly followed themselves up with articles stating his apology, using such euphemistic headlines as “California Imam apologizes for sermon seen as inciting to Jews, condemns anti-Semitism”. ‘Seen as inciting’? Are we really so afraid to call it what it is? It is not ‘seen as inciting to Jews’, it is a violent call for genocide against the Jewish people. It should be stated by all peace-loving members of society as such.
This is not isolated. A look at this video showing just how widespread this feverish hatred of Jews is throughout the Arab world should make any real supporter of peace and justice feel slightly ill. And yet….

The call to annihilate Jews is so widespread that it baffles me that nobody, particularly not your average social justice warrior, is marching against it. It baffles me that anti-fascists remain silent while coming to the often unnecessary defence of Muslims in America, condescendingly and incorrectly stating that they are ‘all oppressed’.
Black people in Africa are being traded and owned as slaves by Islamists and it genuinely seems like absolutely not one single social justice warrior (even with America’s history of slavery) is losing a minute of sleep over it.
These Leftist anti-fascists make up the other frightening and dangerous group of people of which I am afraid: the enormous mob fervently defending those advocating for Sharia, marching violently against ‘all forms of oppression’ while simultaneously beating down those who express any opinion different from theirs or those who are deemed to represent people who have opinions different from theirs (such as ‘straight, white males’ for example as can be seen in this perfect example of this mob).
This is the march of the Leftist. This, sadly, appears to be what your average social justice warrior is today.

Daily Wire: Who is ANTIFA?

Much like the activist atheist’s desperate attempt to shove a belief system down the throat of anyone who will listen in order to ‘free the listener’ makes him a dogmatic and intolerant preacher, so too is the Leftist social justice warrior not a beacon of peace, tolerance and anti-bigotry but a tragic and ironic bigot in the dictionary definition of the word:
Bigot: “a person who is utterly intolerant of any differing creed, belief, or opinion”.
Leftists are quickly becoming known for their inability to converse or even state what it is they are standing up for, while becoming violent at anyone holding up a mirror which shows them this. Their bizarre support for Socialism provides an Orwellian twist given their hysterical shrills of being anti-fascist:
Fascism: “a governmental system led by a dictator having complete power, forcibly suppressing opposition and criticism, regimenting all industry, commerce, etc., and emphasizing an aggressive nationalism and often racism.”
Of course many people supporting an anti-racism march or the Women’s march have the good intention of ‘being against racism’. But this is irrelevant to what the movement has become.

In the greatest irony of our time, white supremacy / Neo-Nazism, Islamism and Leftism all:

They are simply different expressions of the same bigotry, the same fascism.
In an irony so great and tragically comical that I imagine that if this was explained on a modern University campus the average student would burst into flames of cognitive dissonance, the only place that some form of Socialism has actually worked is Israel: the Kibbutz. This is not because Socialism works, but because Jewish culture and religious practice lends itself to helping one another and never letting anyone be without.

In summary what I am saying is this: 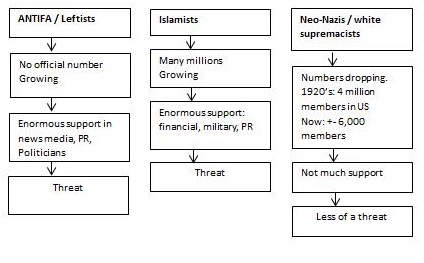 This is the real danger today. This is what I fear.
So the question was: why is only one group of crazy supremacists, and the least threat supremacists at that, being given attention?
There can be only a few reasons for this:

Why, when we know radical Islamism, with its new protection afforded it by Leftism, has momentum and is growing and spreading like wildfire, must we be told that “oh that’s nothing because it’s just a lone wolf knife attack / truck attack and has nothing to do with Islam” and “white supremacy is back and going to kill you”? Fear.

Until everyone in the news media fesses up and starts telling the truth about what is and what is not fascism, and stops the unacceptable dismissal of those courageous Muslims working so very hard for reform and supports them instead, and also stops the lie that Trump created Neo-Nazis as they were around since before he was born, this pressure cooker will continue. It would also be appreciated if said news media / activists / social justice warriors / marchers for peace / decent freedom-loving people / politicians would stand up and denounce the constant call for the genocide of the Jewish people.
Tell the truth. Behold the mirror. #Peace.